An American man has taken to social media to advise ladies to be wary of any guy who tells them he does not celebrate nor believe in valentine.

Valentines’ Day is believed to be a dedicated day to celebrate love and romance. This special occasion that holds on the 14 February every year is rooted in the ancient Roman Day of Love. Emperor Claudius II executed two men — both named Valentine — on Feb. 14 of different years in the 3rd century A.D. Their martyrdom was honored by the Catholic Church with the celebration of St. Valentine’s Day.

Well, in the contemporary age, the annual celebration seems to have been misconstrued and believed to be a day of gifting among lovers even if you do not hold much belief in the holiday as any other holidays.

Taking to Twitter, the man identified as @_imcountry noted that any man who tells a lady he does not believe in Val should be dumped.

“Soon as that man says “Valentines Day really isn’t my thing. It’s just another day to me”. Leave him immediately. Men will move mountains for the people they truly want to do it for” He Tweeted 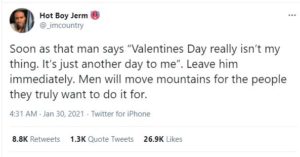